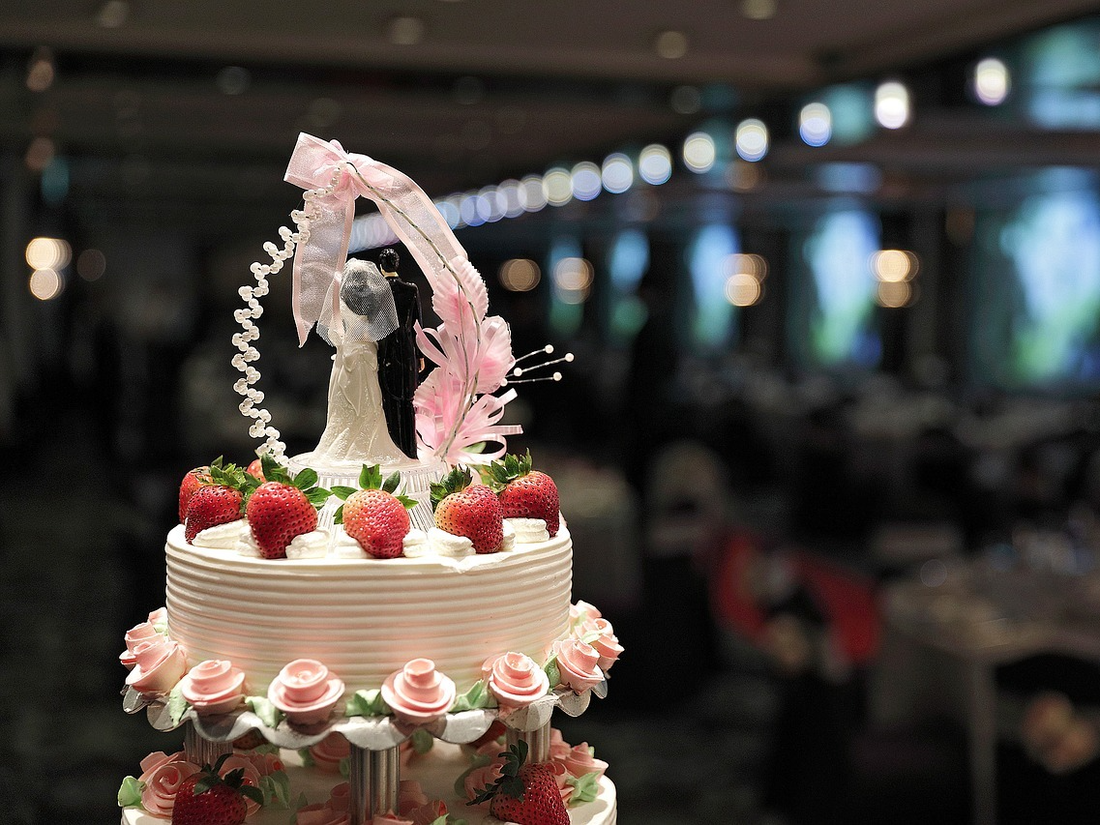 A wedding cake stands at a venue.

Earlier this year, Curious City answered a question about where new COVID-19 cases were coming from in the Chicago area. At the time the answer was long-term care facilities, essential workers and possibly asymptomatic kids.

But this summer that equation has changed. Chicago and national health authorities have seen a sharp rise in COVID cases among younger people — and many of those cases have stemmed from social events, including weddings.

Chicago Health Commissioner Alison Arwady said “celebratory gatherings … have been the source of significant spread” in the city this summer. And she thinks part of it has to do with a false sense of security people can feel at events full of friends and family.

“It’s quite natural for people to feel that somehow because I love these people or know these people well that we are magically protected from COVID but that’s just not true,” she said.

And local health officials say weddings have been the source of several cases of COVID-19 in the Chicago area. These include cases of Illinois residents returning to the state after attending a wedding as well as weddings being held in and around the Chicago area. And in Maine last month, a wedding turned into a super-spreader event with 175 cases and seven deaths being linked to the celebration.

Chicago hasn’t seen a case like the one in Maine yet, but wedding photographer Cherie Schrader says she worries that could happen here. Even though Illinois restricts the number of guests to a maximum of 50 people or 50 percent of a room’s overall capacity — whichever number is smaller — Schrader and others told WBEZ they’ve seen multiple weddings where venues did not follow the rules and the number of guests well exceeded that limit.

“I was at a wedding in July in the [south] suburbs and there were [about] 165 people and not one of them was wearing a mask,” Schrader said. “I was the only one — and actually I was wearing two for my own protection. … I had to quarantine for two weeks after that because I didn’t feel that it was safe for me to be around people after I had been around that many people indoors.”

Schrader worked at another wedding where she was told that it would be an outdoor wedding, “but when I got there the whole thing was inside and they were all dancing without masks.”

“The rule in Illinois says dance floors should be closed but ‘should’ is a very loose word,” she said. “So the clients tell me, ‘but we want a dance floor.’ So I tell them ‘well, the whole room can be your dance floor,’ because there is no way to keep social distancing on a 12 by 12 piece of square located in front of the deejay table.”

And Nisi says her deejays have worked at many weddings this summer where guests were dancing on dance floors, not social distancing and not wearing masks.

Both Nisi and Schrader say they’ve been caught off guard several times this summer when clients have promised them they would follow the rules on capacity and masks but have not. Neither wanted to name the venues that allowed the violations, but said the establishments largely turn a blind eye to rule breaking.

“[It seems like] they are not regulated at all,” Schrader said. “I found out from one of my brides that the venues are telling them ‘we are not enforcing masks, that’s up to you.’ I’ve actually heard that from a couple of my brides now.”

Nisi said she has reported violators to various county and municipal authorities but has received less than enthusiastic responses.

“I actually had someone tell me from one municipality I called who told me, ‘I’m not going to bust a wedding’,” she said. “And I was like ‘I know that is an unenviable position to be put in but, as the public health person for that city, it is your job to harsh that mellow.'”

Health commissioner Arwady says she is disappointed to hear these reports from event professionals but is not surprised.

Still, Arwady says it doesn’t have to be this way. Some smart adjustments can keep weddings from turning into possible super-spreader events. The commissioner says she will not attend her own cousin’s wedding this year because the guest list was reduced to just a handful of people.

“But later she is planning to have a much larger party a year or year and a half from now where we are at a point where it is much safer, and I am completely in support of an approach like that,” Arwady said.

In the meantime, Nisi is trying to keep her deejays safe with a bunch of new equipment she’s purchased for public gigs.

“I got plexiglass deejay booths made for all the deejays,” she says. ” I’ve got request lines so people can text requests and they never have to approach the deejays, and then we got microphone covers wipes and masks. I’ve got whole PPE kits that the deejays have to pick up and take to the event with them.”

She says that COVID has forced her to look at wedding planning in a whole new way this summer.

“It used to be the biggest moral quandary I’d have was whether or not the host wanted us to play too much Lady Gaga or when we should do the bouquet toss,” she recalled. “But now we have to think about whether or not we are going to be part of a super spreader event. I just think it is so ethically insane to have an event right now that goes against rules that are put in place just to keep everybody safe.”

Arwady says the city of Chicago has already fined and cited dozens of businesses for violating COVID safety rules, and she encourages consumers to report offenders to the city using 311.

Monica Eng is the reporter for WBEZ’s Curious City. You can write to her at [email protected].