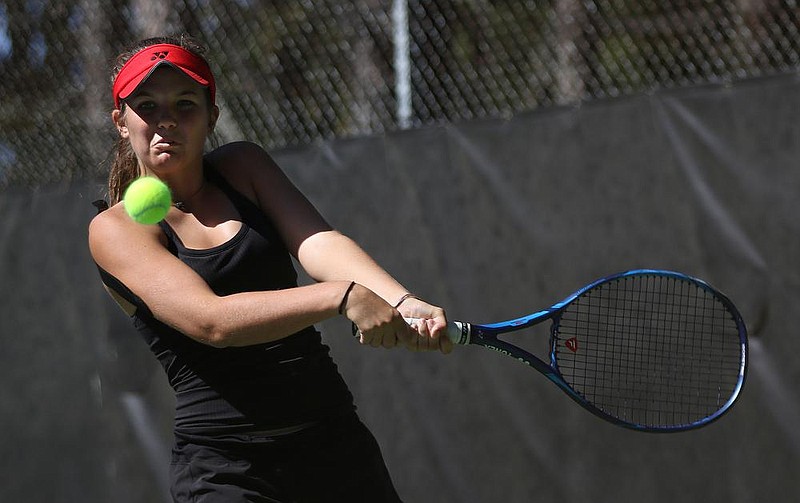 A sophomore got the best of a senior in the Class 6A state boys singles tennis championship.

Matthews kept his game plan simple going into the match.

“I was trying to win the state title and trying to stay consistent,” Matthews said. “I was going to do whatever it takes.”

Maxson led the first set 2-1, but Matthews went on to score the set’s final five points to go ahead 1-0 in the match.

In the second set, Matthews got out to a 2-1 lead before Maxson tied the set twice to get it to 3-3. However, Matthews was able to score the next two points for a 5-3 advantage. Maxson went on to tie the set for a third time at 5-5 with two consecutive points.

The set went to a tiebreaker point, with Matthews closing out the match for his first state championship.

Tuesday’s warm weather was a factor for Matthews wanting to win in straight sets.

“It was pretty hot today, so a third set would have been tough,” Matthews said. “He played great. I did all I could.”

“He played super consistent, which is the way he should play, because I was giving him point after point in the first set,” Maxson said. “Early in the second set, it carried on until I finally found a little rhythm. I started to play to my strengths.

“He is the most consistent player alive. He’s in unbelievable shape, and he’s crazy fast. I really had to change up my average game plan, which is not that style of play. He’s never going to give you anything. No free points, ever. You have to work for it so hard.”

The Rogers duo of Jenna Kate Bohnert and Grace Lueders won the girls doubles title with a 6-3, 6-0 victory over Bentonville West’s Darby Allison and Eva Lopez.

Even in defeat, Maxson showed some joy after his match. He led his Little Rock Central teammates in the school’s traditional “Can I get a roll call” chant that results in the answer of “Central, hurrah!” Little Rock Central Principal Nancy Rousseau and Little Rock School District Superintendent Michael Poore also joined in.

“I want everyone in Rogers to hear us,” Maxson said.

It was a light moment in a season that Maxson wasn’t sure was going to take place because of the coronavirus pandemic, but teams throughout the state got the go-ahead to play the 2020 season. Both Maxson and Matthews were pleased to play each other.

“I was so certain that we weren’t going to get halfway through the regular season, and we just finished state,” Maxson said. “That’s amazing. Our administrators have done an unbelievable job allowing this to happen so well. There have been so few disruptions on the circuit.”

Said Matthews: “I’m pretty glad that we were able get out of quarantine. It was nice to play tennis.”