Jim Parsons remembers the moment he knew he was gay.

The “Big Bang Theory” actor was studying theater at the University of Houston, where he was surrounded by loving, open-minded friends and introduced to landmark gay plays “Angels in America” and “Love! Valour! Compassion!”

“The first time I had a crush on a boy in undergrad, I was like, ‘Oh, (shoot), this is seeing the world in color,’ ” Parsons says. “I realized all the crushes I’d had on girls in the past (were) black and white in comparison. And I was like, ‘Well, I can’t go back. I am Dorothy and I walked out of the house into Oz, and I’ve just got to keep going down the brick road.’ ” 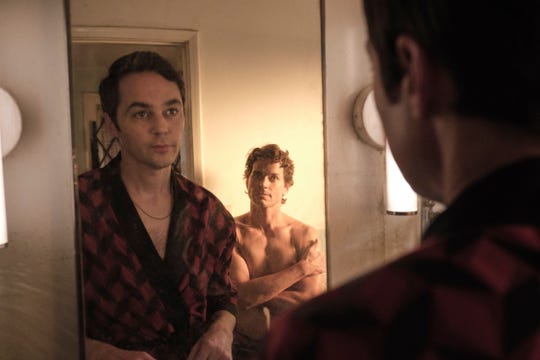 Michael (Jim Parsons, left) harbors shame about being gay – and feelings for his friend, Donald (Matt Bomer) – in “The Boys in the Band. (Photo: SCOTT EVERETT WHITE/NETFLIX VIA AP)

It was a life-changing experience for the four-time Emmy winner, who publicly came out in 2012 and married his longtime partner, TV producer Todd Spiewak, in 2017. Now, Parsons, 47, leads the all-gay cast of Netflix’s “The Boys in the Band” (streaming Wednesday), adapted from Mart Crowley’s 1968 play. The movie reunites the Broadway cast of the play’s 2018 Tony Award-winning revival, which starred Parsons, Zachary Quinto (“Star Trek”), Andrew Rannells (“Girls”) and Matt Bomer (“White Collar”).

The drama unfolds in a chic New York apartment in the late ’60s, where Michael (Parsons) is hosting a birthday party for his friend Harold (Quinto) and their pals, all of whom are gay. But the booze-soaked night takes a turn when Michael’s homophobic, maybe closeted college roommate, Alan (Brian Hutchison), shows up unannounced, and the men begin to air their resentments: for each other, and a society that has conditioned them to hate themselves.

The stage play and William Friedkin’s 1970 film version were considered groundbreaking 50 years ago for putting gay characters front and center, warts and all. But critical reappraisals haven’t always been kind, with some in the LBGTQ community feeling that “Boys in the Band” plays into dated, harmful stereotypes that all gay men are self-hating, catty and unable to commit to meaningful romantic relationships. (“Show me a happy homosexual and I’ll show you a gay corpse,” Michael says late in the play.)

The first time Parsons read it, “I was confused, I’ll be frank with you,” he says. “The trick was understanding and accepting the time these men were living in, and that started to make some of the ways they behaved and talked and dealt with each other make more sense.” 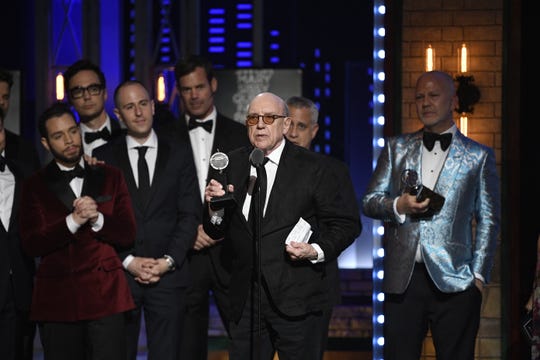 “The Boys in the Band” playwright Mart Crowley accepts the Tony Award for best revival of a play, along with producer Ryan Murphy, right, and cast members in 2019. (Photo: DANIELLE PARHIZKARAN/USA TODAY)

Joe Mantello, who directed the 2018 production and new movie, recalls finding the original film “absolutely terrifying” when he saw it in college as a just-out gay man. He hesitated when super-producer Ryan Murphy (Netflix’s “Hollywood”) approached him about reviving the show a few years ago but says his respect for the material has grown exponentially since.

“People tend to discuss this play in terms of the self-loathing,” Mantello says. “That is definitely a major component in the script, but I also see tenderness, forgiveness and heroism. A lot of that is this particular group of actors and how they were able to (bring) nuance to these characters.”

Latinx actor Robin de Jesús, a Tony nominee for Broadway’s “In the Heights” and “Boys in the Band,” plays the unapologetically flamboyant Emory, one of only two characters of color in the film (along with Michael Benjamin Washington’s Bernard, a sophisticated yet reserved Black man). He could relate to the script’s depiction of friendship among gay men, who are often ostracized by family members and classmates growing up, and forced to suppress parts of themselves.

Emory (Robin de Jesus, left) and Michael (Jim Parsons) attend the party from hell in Netflix’s “The Boys in the Band,” an adaptation of the monumental gay play. (Photo: SCOTT EVERETT WHITE/NETFLIX)

“Everyone inherits trauma built into our DNA, but when you’re also gay and come from trauma, it’s like, ‘Now I’ve got to add this to it,’ ” de Jesús says. “That’s the beauty of this play: the recognition that the families we create sustain us. That sense of community has always been there and is vital to our survival.”

There was a similar sense of comradery on set, Parsons says, given that he had never worked with so many out actors and creatives on a project before.

“There was almost a primal, tribal aspect that I didn’t realize I belonged to, in a weird way,” Parsons says. “(These characters) lived in a time when it was so much a necessity for them to be surrounded by that tribe for protection, and we are fortunate enough to live in a time where that’s not as big of a necessity in our culture. But something’s lost in that we don’t now connect in that way as often. I didn’t realize that for myself until I’d gone through this with these guys – it’s a specific fraternal group feeling I’ve never had before.”

Everything coming to Netflix in October: From Adam Sandler’s new movie to more ‘Schitt’s Creek’

Fall streaming preview: 10 must-see new movies to see while stuck at home, from ‘Mulan’ to ‘Rebecca’