The respiratory virus, SARS-CoV-2, causing the current COVID-19 disease pandemic, initially infects the upper respiratory tract (URT). Infected people may be symptomatic, pre- or asymptomatic, spreading the virus nonetheless. Asymptomatic individuals shed the virus and transmit the disease longer than those with symptoms. It is essential to restrict the initial replication of the virus in URT to prevent the progression of the disease. In a recent bioRxiv* preprint paper, Professor Miles W. Carroll et al. study an agonist for reducing the SARS-CoV-2’s viral load. They show that prophylactic intra-nasal administration of TLR2/6 (toll-like receptor) agonist, INNA-051, reduces viral RNA in the nose and throat, in a ferret model. 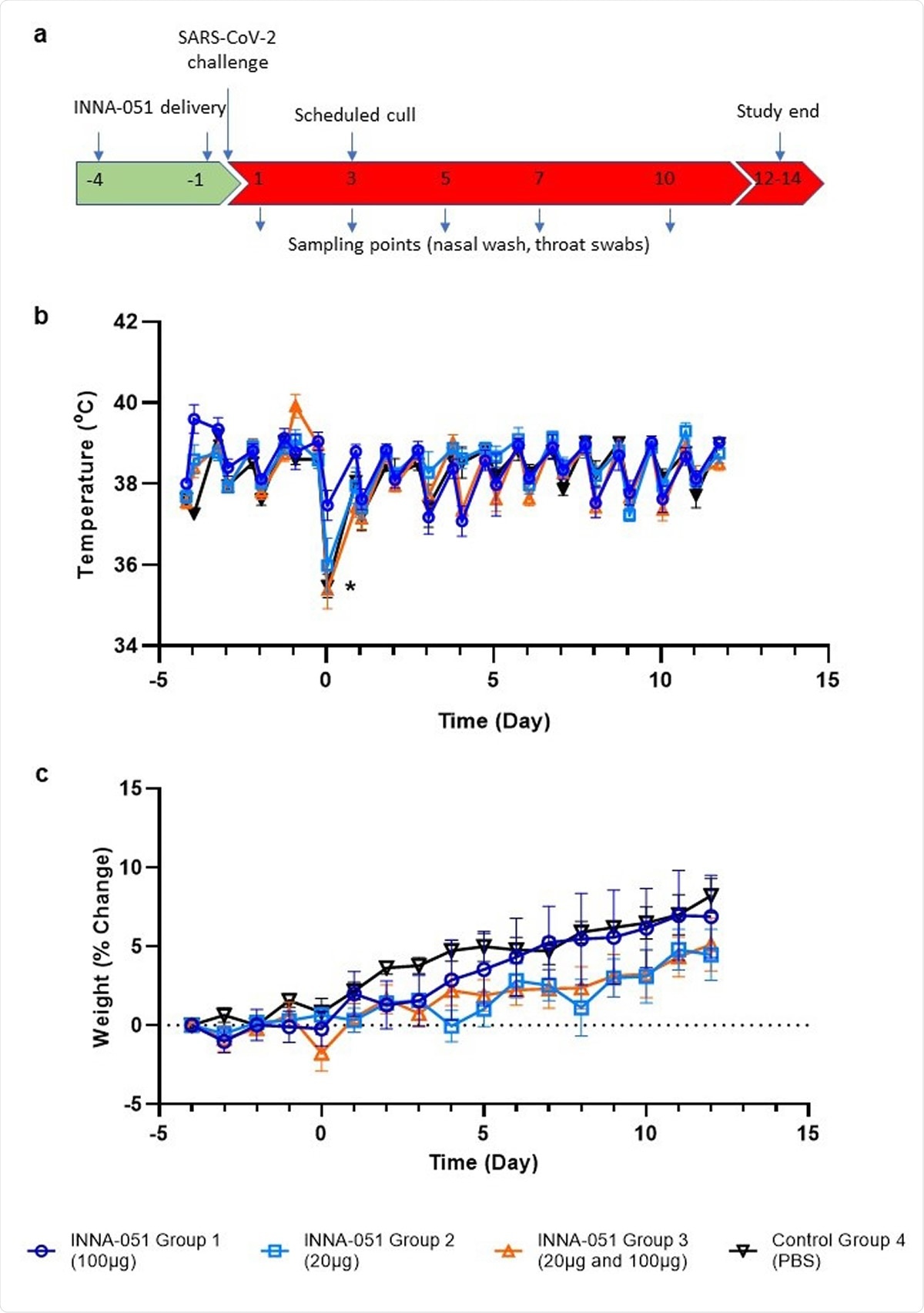 Their study supports developing a therapy based on prophylactic TLR2/6 innate immune response in the URT against the SARS-CoV-2 virus. The authors identified a series of novel synthetic molecules named the INNA compounds that have been developed with TLR2/6 agonist properties. INNA compounds are safe, antiviral drug candidates – specifically designed to exert TLR2-mediated pharmacological activity on the mucosal epithelium.

Novel human CoVs have emerged over the past two decades through transmission via an intermediate animal host. Outbreaks across the world have caused significant respiratory morbidity and mortality. The SARS (in Asia between 2002 to 2004) or MERS CoVs (in Saudi Arabia in 2012) are highly pathogenic. Since emerging in Wuhan, China, in December 2019, SARS-CoV-2 infections have caused mild to severe broad spectrum respiratory symptoms, and life-threatening mostly in the high-risk population such as the elderly.

All these respiratory CoVs primarily spread through airborne routes – respiratory droplets from infected people. And it is known that the initial site of infection is the epithelium of the URT. The URT expresses abundant nasal epithelial cell receptors of the SARS-CoV-2 virus – the angiotensin-converting enzyme 2 (ACE2). To find a topical treatment of the URT, which will boost antiviral immunity and restrict viral replication, the authors identified a synthetic agonist of TLR molecules.

TLR 2 receptors dimerize with TLR1 or TLR6 to recognize a range of commensal and pathogenic microbial molecules; its activation is tightly regulated to maintain immune homeostasis. It is noted that unlike other TLR molecules used for possible innate immunity boost, TLR2/6 agonists of the INNA compound series do not directly activate Type-1 interferons. It is already reported that the INNA compounds protect from lethal influenza virus infection, prevent viral transmission and secondary bacterial super-infections in mouse disease models. In this study, the authors determine the TLR2/6 agonists’ activity against the SAR-CoV-2 virus in vivo. They used prophylactic intra-nasal administration of the novel compound INNA-051, in a SARS-CoV-2 challenge ferret model.

Ferrets are commonly used as models for human respiratory virus-induced diseases to evaluate the efficacy of related vaccines and drugs. Ferrets are good models for this kind of study because they express the virus entry receptor – ACE2, in their airways. Upon infection with the SAR-CoV-2 virus, the virus replication occurs in their URT, and the ferret exhibit dose-dependent viral shedding.

Administration of INNA-051 in the absence of infection did not induce any observable inflammation in the animal; change in body temperature revealed some variation between treatment groups. There was no change in the bodyweight of the animal. Obvious clinical signs of the COVID-19 disease were also not found in ferrets, except the robust respiratory replication of viral in URT. Nasal wash and throat swabs were collected from the ferrets for viral RNA tests.

The observed RNA viral reduction was significant: 10 fold and >10 fold for nasal and throat samples, respectively, in the group with high dose 0f INNA-051. The reduction of virus observed in the group of animals (with a low dose of INNA-051) in throat swabs is 24 fold (96% reduction) and in the nasal wash is 15 fold (93% reduction) compared to untreated animals. Lung tissue samples were analyzed to detect the SARS-CoV-2 virus beyond the URT. Viral RNA was not detectable. The significant reduction of URT viral RNA levels are observed – this implies airway immunity and enhanced antiviral host defense.

Many drugs may exhibit a reduction in clinical disease, but do not reduce the virus load and help halt the viral transmission. Hence, it is crucial to develop a drug that rapidly boosts innate immunity at the primary site of respiratory infection. The authors acknowledge that the ferret SARS-CoV-2 model has its limitations, not representing the severe spectrum of COVID-19 disease. They are, however, positive of the encouraging prophylactic results observed in this study. They report a predictive value of antiviral effectiveness and its translation into human infectious disease.

The antiviral respiratory prophylactic drug, INNA-051, has many advantages: fast-acting to protect, little or no antiviral resistance, option to self-administer, and non-prohibitive cost for large-scale manufacturing. This TLR2/6 agonist INNA-051 can also be used as complementary to potential vaccination programs. This study provides evidence for the first time to support a novel approach of arresting SARS-CoV-2 virus transmission by prophylactic intra-nasal administration of INNA-051; this is based on viral shedding analysis in an in vivo SARS-CoV-2 infection model.

bioRxiv publishes preliminary scientific reports that are not peer-reviewed and, therefore, should not be regarded as conclusive, guide clinical practice/health-related behavior, or treated as established information.