The groom premiered the song to his bride at their rehearsal dinner.

Delivering the latest in style, inspiration, helpful tips and tricks, and everything else you need to know to plan the perfect Philly wedding. 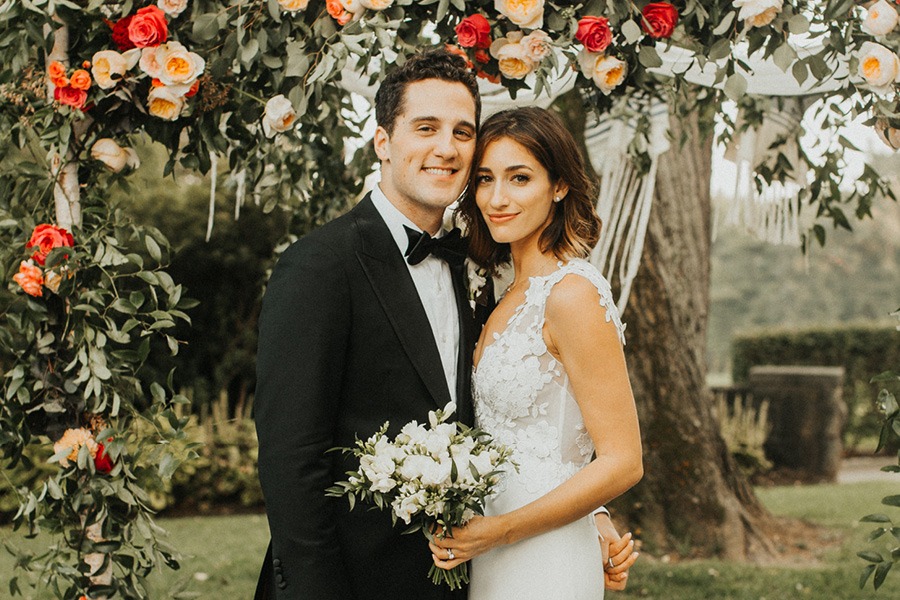 It’s been almost two years since Brooklyn-based singer/songwriter Jesse Ruben and actress Jen Jacob got married at Radnor Valley Country Club. But their Big Day and all the moments around it are memorialized in a new song, “Future,” that Jesse, a third-generation Philadelphia musician (he was born in Montgomery County), released to the public this past Friday, September 25th. Well, it’s not necessarily new to everyone: He premiered it to Jen, who hails from Bucks County, during their rehearsal dinner — this after secretly practicing in front of his fans at concerts for months beforehand. Why now? Well, the day was the anniversary of their first kiss back in 2012. But more than that, it felt like the right time. “I think the message of his song right now is that our futures feel really uneasy,” says Jen. “But it’s a reminder that there’s a lot of good ahead, too.” A sweet touch? She edited clips (from home, during quarantine) from their wedding video by Tree of Life Films & Photography, as well as photos and snippets of them over their years (including Jesse’s proposal), into the accompanying music video. They share their story and video below.

This story is part of Philadelphia Wedding’s on-going Real Talk series, where real Philly couples share their unique approaches to wedding planning and marriage. If you have a unique story or experience worth sharing, we’d love to hear about it.

As Told To: Kristen Schott 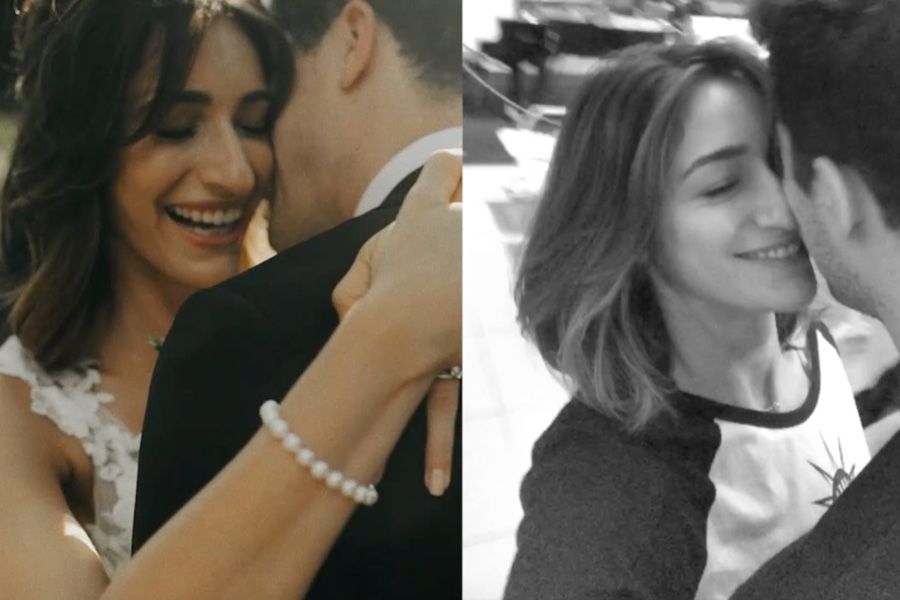 Jesse: When I write songs, I always want my writing to be understandable. I don’t want people to be like, “This sounds good, but I don’t really know what he’s talking about.” I know it’s so cliché for a singer-songwriter to write a song for his wife for their wedding, but it was something that I wanted to do. I kept going back to the same moment, which was when Jen walked in to our first date (at Rockwood Music Hall in New York). I remember turning and seeing her, and having all of these thoughts: This is my person; my life is very different now. I wanted to put that into this song. I also wanted to write something lovely and romantic that would make her cry, which she did.

Jen: Our story goes back a little further than that.  Jesse went to sleepaway camp with my best friend, Lucy, growing up, who actually married us. I had known about Jesse growing up because he was a couple years older than us, and Lucy would come home with mixtapes from this guy. For her high school graduation party, her parents hired Jesse to play. So he shows up to a backyard party wearing cargo shorts and a shirt that says, “This is how I roll.” But that was like six years before our first date. [Ed note: The couple got engaged in February 2018, outside of Rockwood Music Hall.]

Jesse: We got married on October 7th, 2018. I probably finished the song six months before that, and I liked it. Yet you never know if a song is good until you play it for other people. I started playing it at concerts, but I would make everyone in the room put their cellphones away so that nobody would film me. I would basically beg people not to post a clip of it. I probably played it at 20 or 30 shows. Everyone was excited that they were hearing the song before Jen did. No one ruined the surprise or said anything. 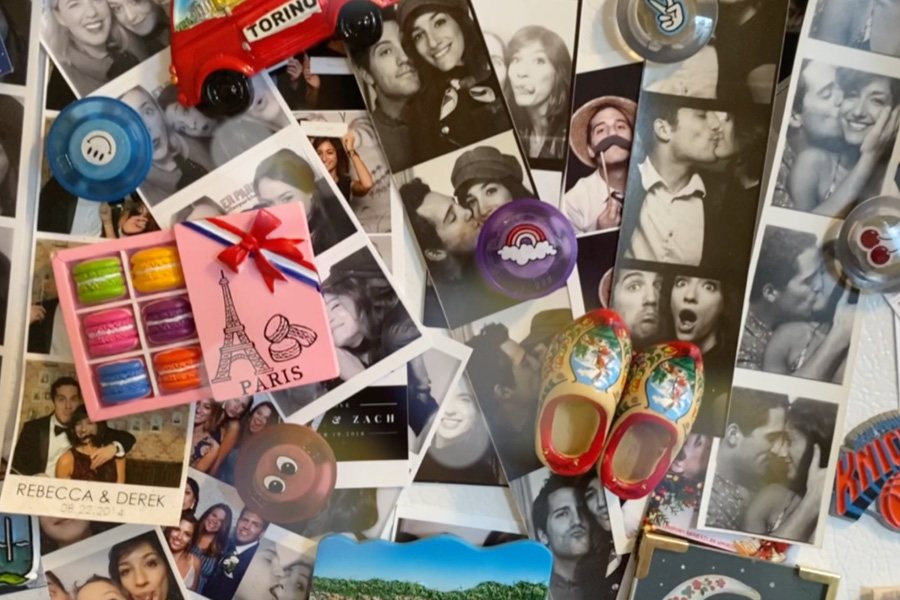 Jesse: A lot of people asked me if I was going to play the song at the wedding. I didn’t want to because I felt like that day should be about the both of us — and really more about Jen, let’s be honest. It felt wrong to take a situation that was supposed to be about us together and then make it all about me. So the rehearsal dinner felt like a compromise for that. But it backfired a bit. We had dinner, and speeches, and we had all this time blocked off for people to speak. I got nervous so I just jumped in and played it at the first opportunity. It was special and emotional. When I was finished, nobody wanted to go after me. So we left.

Jesse: I probably would have released the song earlier. I was trying to figure out a good strategy. I didn’t want to rush it. When the quarantine happened, I thought I’d wait till it was over. But then it was obvious that we didn’t know how long it is going to be. Part of me felt a little strange about putting music out when there’s all this scary stuff going on in the world, but the response I got was people need art and music right now.

Jen: His team wanted him to get the song out with a video, but we were in the middle of quarantine and had no idea how we were going to shoot something. I overheard Jesse talking to his manager about it, and it hit me. Why weren’t we using our wedding video? I started playing with it: I took the video as it was originally handed to us, silenced it and stuck sound on it. It looked beautiful, and I knew we had something. Then I remembered we had our proposal footage. 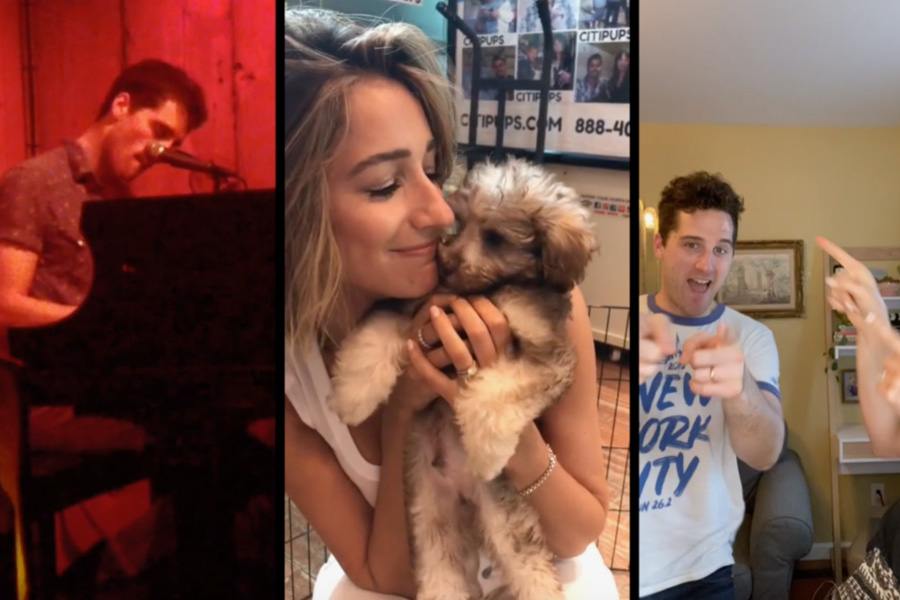 Jen: The reaction has been special. It’s caused so many people to write to us saying I went home, played it for my husband or partner, and we danced together in the apartment to it. I think, especially right now, when we’ve all been stuck together for six months, it’s given people a way to reconnect with their person and remember how special they are. It isn’t just the person who has been on the couch in the other room. It is hard; we don’t have date nights. We don’t have trips. We’re not going to other people’s weddings to help bring back important moments. For me, that is the biggest thing I’m proud of.

Getting married? Start and end your wedding planning journey with Philadelphia Weddings’ guide to the best wedding vendors in the city.